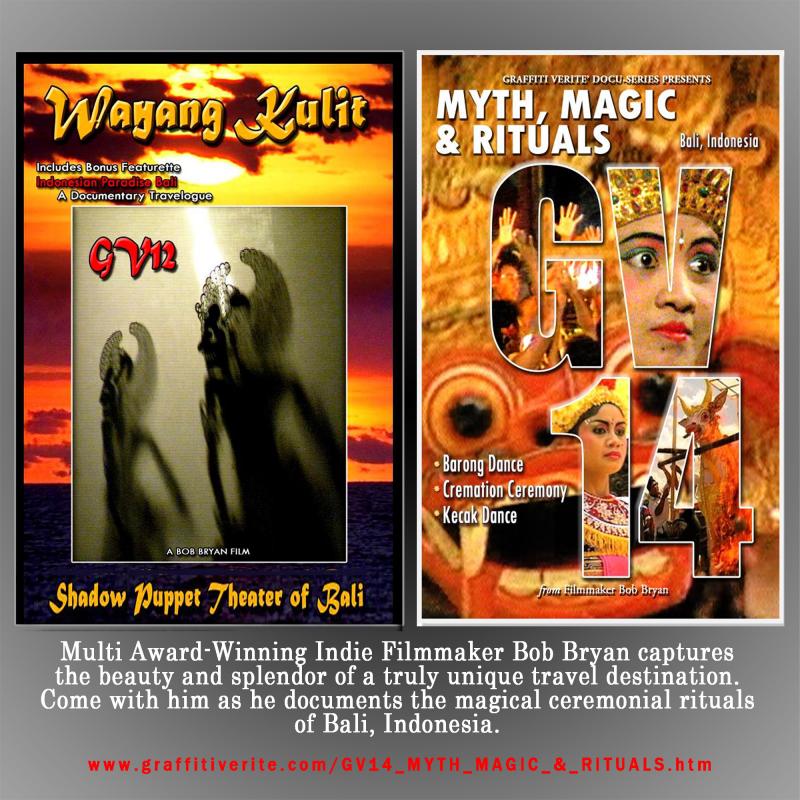 Just 8 degrees south of the equator and 2 miles east of Java is an Indonesian island so famous in legend that the mere mention of its name conjures up images of mystery and excitement. That magical place is Bali, Indonesia. www.graffititiverite.com/GV14_MYTH_MAGIC_&_RITUALS.htm

Traveling halfway around the world in a completely different culture, award-winning filmmaker Bob Bryan discovered the fantastic shadow puppet theater Wayang Kulit. In this wonderful presentation, Bob shares the shadow game live (performed in its entirety on location in Bali, Indonesia) for all of us to experience and enjoy!

“Wayang is the Indonesian word for theater (literally means ‘shadow’). Kulit means skins (the puppets are made of leather.) The Dalang is the master puppeteer who is believed to communicate to physical beings and the spirit world. The Dalang gives life to the puppets while simultaneously singing and speaking all the voices of the characters while simultaneously tapping all the cues for the musicians.” – Traci Cooper, ROVI All-Media Guide

These shadow puppets are believed by the Balinese people to possess amazing mystical and spiritual powers. Believe it or not, the incredible performances of Wayang Kulit date back over 800 years.

All Shadow Puppet pieces are accompanied by the Gamelan Orchestra which is made up of musicians and instruments as a separate entity. The word Gamelan comes from the Javanese word Gamels, which means “to hit or hammer”.

The portrayals of Wayang Kulit and his characters are based on the Indian epic “The Mahabharata” composed between 300 BC and 200 AD, which is the longest running work in world literature. More than three times longer than the Bible, it is often called “the great history of India”. For centuries, Wayang Kulit has been the Balinese version of cinema…considered by many to be a sacred ritual.

BARONG DANCE
For the Balinese people, THE BARONG DANCE is one of the most famous dance rituals in Bali, Indonesia. It is an offering of dramatic art paying homage to God through the beauty of music and movement. “Barong” in Balinese mythology is considered “the king of spirits”. the embodiment of “good”. “Rangda” embodies the opposing destructive forces associated with black magic and dark spirits.

CREMATION CEREMONY
Death is not the end! The Balinese are a very religious people who believe that “the cycle of life” does not end with the loss or “Death” of our temporal selves… of our bodies. Rather, they believe that the spirit of the deceased will return to earth as another human being. This return is called “Reincarnation”. Discover the preparations and execution of this fascinating cultural ritual and reality.

THE KECAK DANCE
Conceptualized as a TRANCE RITUAL, the more than 80 men raise their hands above their heads, flexing their fingers like flames of fire, while chanting “cak ke-cak kec-cak”. Pronounced “Ketjack or keh-chanhk”. Once in a trance state, they are said to communicate with their God or the spirit of their ancestors. Storytellers recite specific stories from the epic “The Ramayana”, the great Hindu holy book, while “dancer-actors” act them out in unforgettable dramatic and magical performances.

Comments:
“Have you ever wanted to take a trip to a foreign country to immerse yourself in their culture, but didn’t have the money? Join filmmaker Bob Bryan as he recounts these magical ceremonial rituals from Bali, Indonesia, in his fascinating new production. Graffiti Verité 14 (GV14) Myth, magic and rituals.” -Michelle Angellini

“…Very stylized, artistic and off the beaten path.” – Miyoshi Grant

“I just watched and really liked the richness and opulence of GV14! They celebrate things differently there. I love these masks! You have the gift of creativity and motivation that a lot of people don’t. haven’t. I can’t wait to see the whole documentary again.” – Madness Jane

“I really enjoyed the subject matter and your editing is right on the money. Great job indeed! Well done!” -James Owen Shepard

“Another Bob Bryan masterpiece. The trailer alone had me sitting on the edge of my seat.” – Eric Canada

“Bob, thank you, the Balinese music immediately caught my attention, but the juxtaposition of subjects fascinated me. Very creative!” -Renee Dawson

In 2014, Bryan World Productions produced GV21 THE WANDA COLEMAN PROJECT: Genius. (period). The multi-award-winning filmmaker presents “one of the major writers of his generation”. Bryan interviews brilliant poet/writer/journalist Wanda Coleman, author of over 20 books: The Riot Inside Me, Mercurochrome, Heavy Daughter Blues, and Mad Dog Black Lady, et al. GV21 is a can’t-miss interview if you’ve ever loved Wanda Coleman’s writing or want to find out what her beautiful life, poetic conceptual process, and creative writing philosophy was all about.

Management of Bryan World Productions:
Bob Bryan (CEO) – Clearly, filmmaker Bob Bryan has been a singularly powerful force in putting the Los Angeles Graffiti Art Movement on the national and international map. Bryan’s GRAFFITI TRUTH’: Read the Writing on the Wall is the classic 600-pound guerrilla warfare in the room demanding respect and recognition from the coveted Art Circles of Power.

This press release was published on openPR.