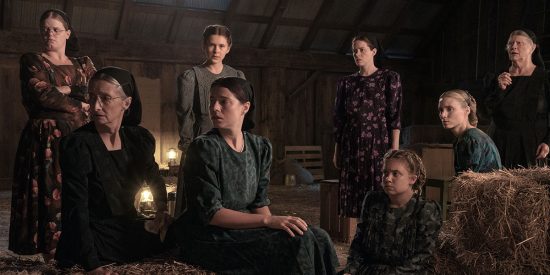 “What follows is an act of female imagination,” says an early title card from the writer-director Sarah Pollythe last project of, women who talk. The film is based on the novel of the same name by Miriam Toews, which was inspired by a series of violent attacks within a Mennonite community in Bolivia, where the men of the colony gave the women animal tranquilizers and repeatedly raped and assaulted them. When the women woke up, bloody and bruised, they were told it was the work of Satan, or they were making it up. These attacks were also an act of “feminine imagination”. Towes, an ex-Mennonite herself, fortunately never faced this level of violence in her community, but the religious and conservative upbringing she experienced influences and informs her writing (you can read All my little sorrowsor watch the 2021 film adaptation, which is semi-autobiographical).

Check out all our TIFF coverage
In women who talk, we are introduced to a group of women the day after an attack in which the men were caught red-handed. With all the men out of town posting bail for the perpetrators, the women are left to decide what to do now that they’ve discovered they’ve been victims of the most aggressive gaslighting imaginable. The attacks are not their fault, not made up, it was the men they trusted who raped them. A vote within the community, carried out via images because they do not have the right to learn to read or write, comes to a tie. They won’t stand idly by, but now this small group of representatives must decide for the colony whether they will stay and fight, or leave the only home they know in order to save themselves and their daughters.

What follows is a full of anger, full of pain discussion that often results in more questions than there are answers. Because nothing is simple, they are dealing with shades of gray. If they stay and fight, do they become murderers, contradicting their belief in pacifism? If they leave, where are they going? They have never even seen a map and have no idea where they are. What happens to their sons if they leave the men behind? If they cannot forgive men, will they still enter paradise? And “Is the forgiveness imposed on us really forgiveness?”

The film is led by an outstanding cast that includes Rooney Mara, Jessie Buckley, Claire Foy (a star here), Judith Ivey and Sheila McCarthy (whose character Greta has a few good anecdotes about her horses Ruth and Cheryl to lighten an otherwise dark mood). Frances McDormand, who acts as a producer on the project, is more of a cameo here, but no less effective in her small role. I have to say there are others in this set that are just as outstanding but for the sake of space I can’t praise them all. They are all truly inspiring.

The only man in the room while the women of the colony discuss their fate is August (Ben Wishaw) who writes the “minutes” of their debate. He had gone off to college and recently joined the colony to help out. Its presence as a force for good is important because it is not a film condemning all men, it is condemning and challenging the patriarchy. In the book, August narrates, but the narrator of the film is rather Autje (Kate Hallette) addressing an unborn child as a result of the rapes they suffered. The change is significant tonal, allowing us to experience this from a young woman’s voice as opposed to a man’s.

Director Sarah Polley works with the cinematographer Luc Montpellier (who also worked with Polley on 2006 away from her) in an unsaturated palate, draining much of the color from the screen (even further for flashbacks). It works for a variety of reasons, highlighting the muted world these women have been in. But with the costumes, the aesthetic makes the movie feel like it’s set in a historical setting; that is, until we get some information that tells us it’s happening much closer to the present than you ever imagined. The imagery here is important and Montpellier finds beauty and hope in the shots taken outside the claustrophobic barn. He somehow finds optimism in the twilight shots as the sun goes down and the women decide their fate.

This inventive and creative director already has the wonderful films take this waltz and the award-winning 2012 documentary Stories we tell behind her, but women who talk is Sarah Polley’s masterpiece. Clearly a work of passion, complex and layered, this film is sure to resonate, particularly with women, as we are all still walking around in a man’s world. Adapted by Polley, who seems assured of a Best Adapted Screenplay nomination for his work (among possibly others for this film), women who talk asks important questions about how, in the current political landscape in particular, we can, as a group, take our responsibilities and how we can use our voices collectively for change. Sarah Polley assures that when women speak, we all listen.