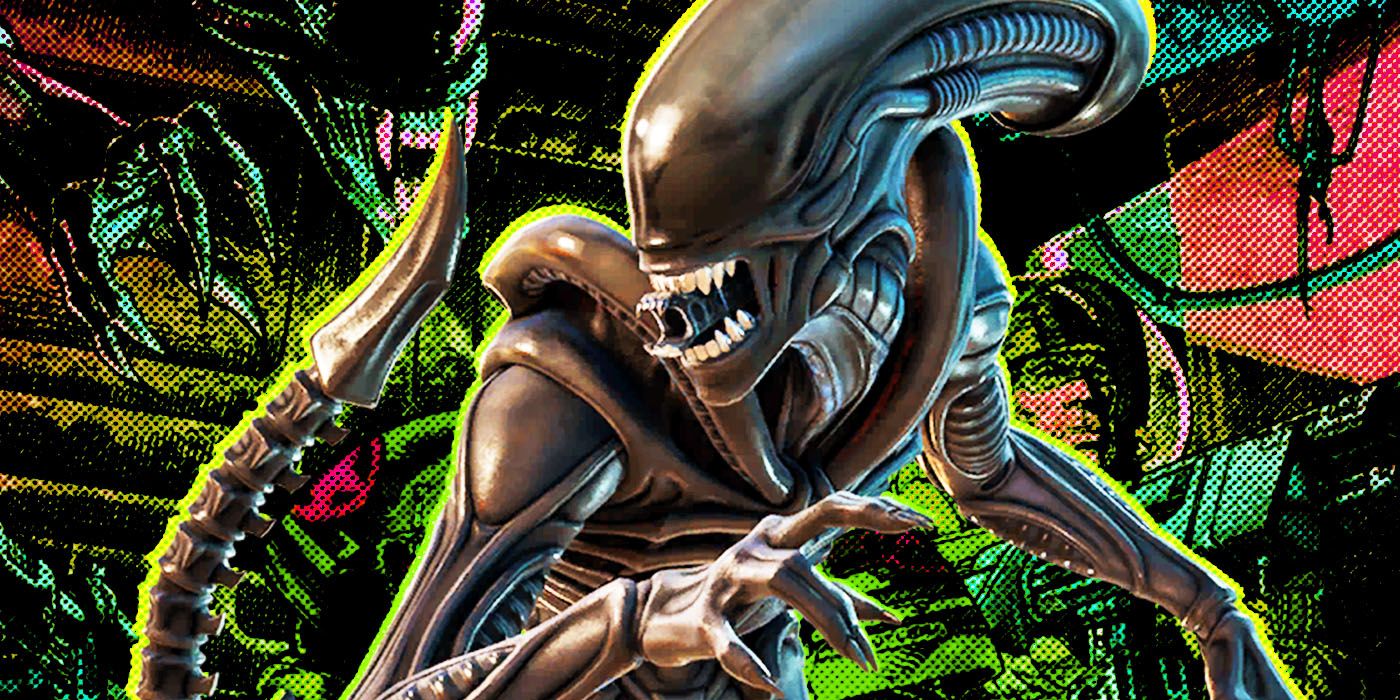 In the latest Comic Book Legends Revealed, discover the comic book crossover that was going to involve Aliens until it couldn’t at the last minute.

Marshal Law was going to cross over with Aliens before the deal fell apart so late that Pat Mills and Kevin O’Neil had already started the comic book series.

In the mid-1980s, DC had famously done a number of comics with British creators, most famously Alan Moore, Dave Gibbons, Kevin O’Neill and Brian Bolland (Alan Grant, Jamie Delano, John Wagner, Grant Morrison, Neil Gaiman, Steve Dillon and Garth Ennis were still to come), and Marvel got in on the “British Invasion” by pairing O’Neill with his Nemesis the Warlock collaborator, Pat Mills, on a new satirical character called Marshal Law.

You see, due to the vagaries of comic book publication history in England, a number of British comic book creators grew up without access to the major American superhero comic books. Thus, for the most part (with some major exceptions with the older creators, like Alan Moore), the British comic book creators did not have the same attachment to superheroes that American writers did. In England, the attachment was often to war comics, instead, which is why writers who don’t care at all about superheroes (Garth Ennis and Pat Mills, to name two) feel the way about WAR comics that American writers feel about superheroes.

In any event, Mills explained the genesis of Marshal Law to Dorkland’s Christopher Helton, “Marshal Law originated because I have a huge admiration for genuine heroes who are usually ignored in fiction. I have little respect for super heroes who – in mainstream at least – are rarely heroes in the true meaning of the word. Usually they’re pillars of the establishment armed with the magical equivalent of America’s high tech weaponry which it uses to subdue the Third World. They ain’t heroes. So Marshal Law’s views and my own are rather close. Thus my heroes have to reflect my own experiences or views; invariably they’re under-dogs, often working class. It may be a catharsis for me to write them, but I think I also have a muse who drives me. Who she/he/it is unknown but it’s a powerful motivation and when I write traditional stories they invariably fail because my muse doesn’t like them or motivate me.”

RELATED: Why Did Batman and Robin Really Break Up in the 1960s?

Marshal Law is a “cape-killer,” who hunts down rogue superheroes. Essentially, it is a way for Mills and O’Neil to parody both the popular British character, Judge Dredd (a violent law officer in a futuristic city) and superheroes (as Law, of course, violently hunts down superheroes). The initial series for Marvel’s creator-owned Epic line of comics was a hit and it was followed by a one-shot where Law specifically targeted versions of Marvel superheroes…

RELATED: Iron Man: Did Tony Stark Almost Have to Answer For His Company Building Sentinels?

Mills and O’Neill then took the character to a new comic book company, Apocalypse Comics…

Sadly, for a company with such an upbeat name, Apocalypse Comics was not long for this world and Mills and O’Neill then brought Marshal Law to Dark Horse Comics…

One of the obvious concepts for a character like Marshal Law was to have him take on established characters and in 1993, that finally happened, as Law returned to Epic Comics for a crossover with Hellraiser, a property that Epic had a license with at the time …

Dark Horse, of course, had plenty of licenses itself, including with 20th Century Fox’s Aliens characters…

However, after the pages were drawn, the deal fell apart, so O’Neill had to just modify all of the pages with the Xenomorphs, like here…

This one sounds tricky, as the comic is filled with parodies of OTHER characters, so how do we know it wasn’t just intended as a PARODT of the Aliens? Well, Mills himself explained on Twitter last year (he’s discussed it plenty of places, but this one is nice and easy)…

Marshal Law would go on to have a number of other crossovers, though, including ones with other Dark Horse properties, like The Mask…

CHECK OUT A TV LEGENDS REVEALED!

In the latest TV Legends Revealed – Discover the line of dialogue that one Three’s Company star said they wouldn’t even say with a gun to their head!

OK, that’s it for this installment!

Thanks to Brandon Hanvey for the Comic Book Legends Revealed logo, which I don’t even actually anymore, but I used it for years and you still see it when you see my old columns, so it’s fair enough to still thank him, I think.

Feel free (heck, I implore you!) to write in with your suggestions for future installments! My e-mail address is [email protected] And my Twitter feed is http://twitter.com/brian_cronin, so you can ask me legends there, as well! Also, if you have a correction or a comment, feel free to also e-mail me. CBR sometimes e-mails me with e-mails they get about CBLR and that’s fair enough, but the quickest way to get a correction through is to just e-mail me directly, honest. I don’t mind corrections. Always best to get things accurate!

Here’s my most recent book, 100 Things X-Men Fans Should Know And Do Before They Diefrom Triumph Books.

If you want to order a copy, ordering it here gives me a referral fee.

Here’s my second book, Why Does Batman Carry Shark Repellent? The cover is by Kevin Hopgood (the fellow who designed War Machine’s armor).

If you want to order a copy, ordering it here gives me a referral fee.

The cover is by artist Mickey Duzyj. He did a great job on it…

See you next time!

The Most Important Spider-Verse Hero is Back

CBR Senior Writer Brian Cronin has been writing professionally about comic books for over fifteen years now at CBR (primarily with his “Comics Should Be Good” series of columns, including Comic Book Legends Revealed). He has written two books about comics for Penguin-Random House – Was Superman a Spy? And Other Comic Book Legends Revealed and Why Does Batman Carry Shark Repellent? And Other Amazing Comic Book Trivia! and one book, 100 Things X-Men Fans Should Know & Do Before They Die, from Triumph Books. His writing has been featured at ESPN.com, the Los Angeles Times, About.com, the Huffington Post and Gizmodo. He features legends about entertainment and sports at his website, Legends Revealed and other pop culture features at Pop Culture References. Follow him on Twitter at @Brian_Cronin and feel free to e-mail him suggestions for stories about comic books that you’d like to see featured at [email protected]!