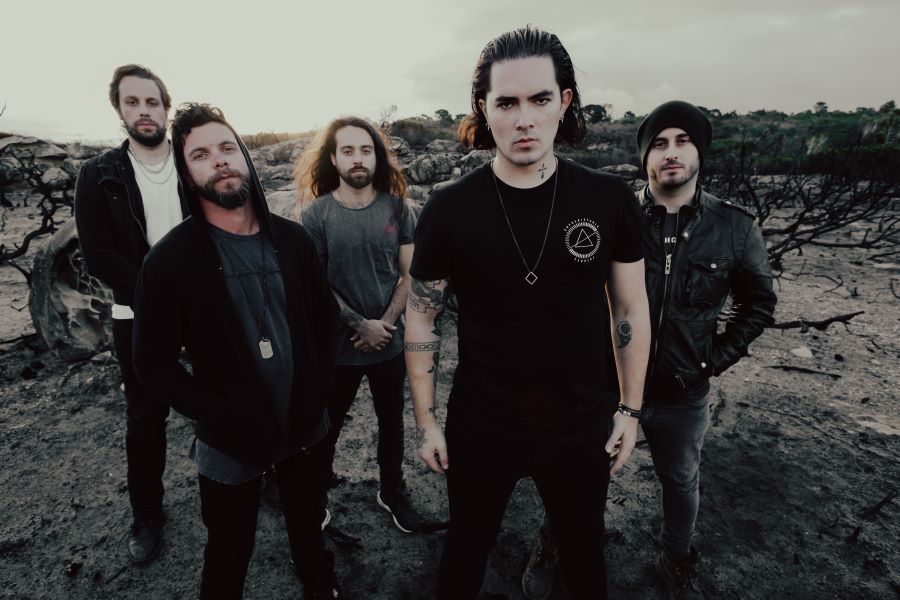 Sydney Hard Rock Outfit bad moon born, recently released the sweet and poignant track “Light Leaves the Day.” It’s a nice counterpoint to their heavier songs, and will be a welcome addition to their setlists. He is speaking to Jordan Von Grae (singer and lyricist) struggles with addiction and the path he took to sobriety. It’s sincere, poignant and beautifully crafted. Written from the heart, it is sure to strike a chord with many listeners.

From the track, said Jordan “Light Leaves the Day is about a time when I was newly sober after several years of chronic alcoholism and drug addiction. The initial clarity that came with sobriety brought several unresolved mental health issues to the forefront, leaving me to deal with them unaided through self-medicating means. It forced me into a terrifying loop of self-reflection that, through therapy and support from those close to me, eventually culminated in a newfound desire to engage in my personal development and change my behavior. The song was written at a time when I was new to this change and while I had hope for the future, I was terrified that my efforts weren’t enough to save the relationships I had. damaged throughout this period. 18 months later, I can safely say that committing to sobriety was the best decision I ever made.

The group was looking for a ballad to help balance out the heavier tracks on their recent singles. Tripguitarist and producer explains: “I had some 3/4 acoustic ideas that I was playing around with and decided to arrange them with several synths in a way that didn’t make them feel like a “typical” ballad. I kind of imagined it as a ballad composed by aliens, with enough nostalgic and modern elements to appeal to a wide range of beings. When we got together to go over the lyrics and vocal melodies, everything fell into place quite naturally.
Voya (Guitarist/Producer)

Accompanying the single is a beautiful video. It was produced by Jordan and Voya. Voya also directed, filmed and edited the music video. Voya gives us the details on the background of the video: “The primary focus of the video was to capture Jordan’s personal experience/journey with the walking plans, using negative space to reflect the feeling of emptiness and isolation addressed in the lyrics. We felt it was important to portray moving forward despite an anxious and uncertain future. As for the band’s plans, we wanted to give a sense of personal intimacy with undertones of the late 90s/early 2000s (which Hinder would /The Goo Goo Dolls/Creed?) In the end, hanging a few lights in our studio garage worked out really well.

To celebrate the release of ‘Light Leaves the Day’, and to remind us that they are indeed a chiseled hard rock band, the band have compiled a list of five of their favorite Australian hard rockers. Continue reading!

Thornhill is a metalcore band from Melbourne, Australia. We’re relatively new to these guys, but we’re big fans of their music (especially their newest single), and can’t wait to see what they do next.

When it comes to Australian metalcore, Polaris are hard to beat. As long-time admirers of their work, they’ve certainly had a big influence on us, especially our recent material. We were really looking forward to playing alongside them during the recent Knight and Day Festivalbut we had to pull out because one of our group tested positive for covid-19.

Northlane are a two-time ARIA award-winning metalcore band from our hometown of Sydney. The way this band incorporates electronic elements into their music has been a big inspiration to us lately, and we look forward to continuing to experiment in this way.

A relatively new band (formed in 2019), Bad/Love is definitely one of the alternative hard rock/metal bands to watch. We were privileged to lock down a support slot for their Sydney show in 2021 before it was unfortunately canceled due to the pandemic.

Fusing heavy, dark elements with pop and alternative rock, Alt. are another relatively new band (formed in 2019) making big waves on the national heavy music scene. As fans of their music, we can’t wait to see what they do.

More to explore on the AU: