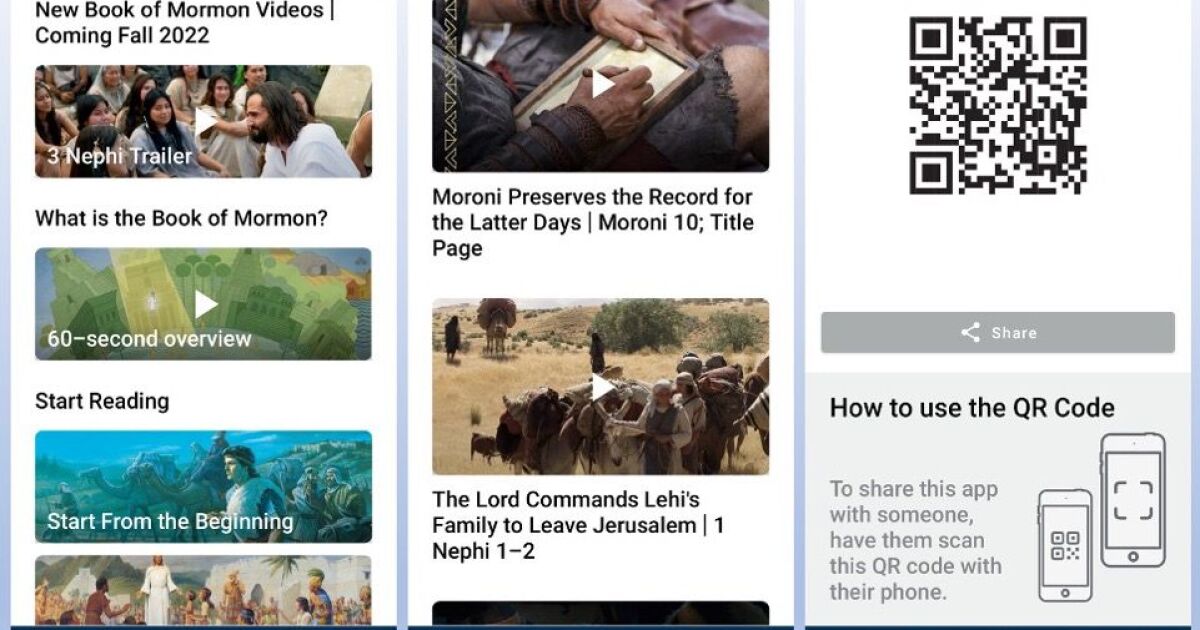 Sharing the Book of Mormon in “Normal and Natural Ways”—on the Subway, in a Hotel, on a Cruise Ship – Church News and Events

As Justin Lether learned, sharing the gospel and the Book of Mormon in “normal and natural ways” can happen just about anytime and anywhere—on the subway, at a tourist attraction, during a hotel breakfast or even soaking in hot water. bathtub on a cruise ship.

“Sharing the Gospel” – particularly through the principles of “loving”, “sharing” and “inviting” – was the focus of discussions in the second hour of the fifth Sunday of July 31 led by the wards and branches of the world accepting the invitation of the Missionary Department to consider such a subject.

Lether, product manager of the Priesthood and Family Department with Book of Mormon Videos, has experienced first-hand the ease of sharing the Book of Mormon in conversations.

While on a cruise several years ago, Lether was chatting with another passenger as they both relaxed in the hot tub. When the conversation ensued with Lether explaining his work, the man asked, “Tell me more about the Book of Mormon—how can I get a copy of the Book of Mormon?

At the time, the Book of Mormon app only offered access to scripture texts and simple search and markup features. But Lether found the app in an online app store and shared the link to it. “I found this guy a link to the Book of Mormon in the middle of the Pacific Ocean,” he said, “in a hot tub in the back of a cruise ship.”

He returned to Salt Lake City with a story and a perceived opportunity. Bryce Anderson, the Book of Mormon app’s product manager, “has done amazing things with it and made it so much more shareable,” Lether said.

The recent integration of audio and visual elements in the newly improved application helps listeners and viewers to increase their understanding and better understand the context of the scriptures.

“I’m a big fan of the app,” Lether said, mentioning three recent experiences during a trip in June where he taped Friend to Friend at the Tokyo Temple’s visitor center in Japan during the open house. before the rededication of the temple on July 3.

First, on a subway platform in a limited exchange of English and Japanese and explaining why he was in Tokyo and what he was doing, Lether – who had a copy of the new Book of Mormon app on his smartphone – offered the QR code for the person to scan.

“The great thing about it is that when it downloads to their phone, it downloads in their native language, regardless of the language of the phone,” he said of the brief interaction.

On a day-long visit to Tokyo Tower, Lether found himself followed by a woman and a small boy, with the woman both curious and eager to practice her English skills. As the conversation dragged on and she learned more about filming on the temple grounds and her work with Book of Mormon projects, she asked how she and her boy could see the content.

Standing at the base of Tokyo Tower, Lether—who had changed her Book of Mormon app to Japanese—showed her how she could find Book of Mormon videos in the scripture text, where she could find the meeting room. of the Church closest to where she lived, and how to press a button to talk to the missionaries about what she was seeing and inquire about possible English classes.

“It was a really sweet moment, because I hadn’t developed enough of a relationship where I could ask, ‘Hey, can I have your phone number and text you a link,'” Lether said. “But I could swipe up, show the QR code that she could scan, and she felt totally comfortable. It met her need – she wanted to know more and watch the videos.

During his extended stay in a Tokyo hotel, he chatted daily with the young woman preparing breakfast. As Tomomi Akatsuka learned more about Lether’s work and his project, the conversations — and questions — led him first to share the Book of Mormon app and then to show off its features.

“I downloaded the app and it was really easy to use,” Akatsuka told Church News. “The Japanese was well translated. The video was beautiful and it made it easier for me to understand.

This extended to him inviting her to “come and see” by visiting the temple’s open house, with Lether securing her a spot on a VIP temple tour and introducing her to Elder Takashi Wada, the Authority Seventy general which is the North Asian region. President, and his wife, Sister Naomi Ueno Wada.

“So I had this opportunity to share for two minutes, not even knowing the language, and it worked,” Lether said of the subway platform moment, the first of his three sharing experiences at Tokyo. “Then I had this next opportunity to share for about 20 minutes and use the ‘discover’, ‘watch’ and ‘share’ options. And then there’s this longer and repeated interaction and this more established relationship whom I continue to follow up with texts and emails.

“So from a hot tub to the temple in Tokyo, it worked for me.”