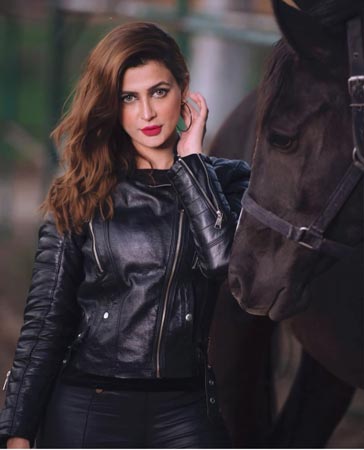 Tell us about your foray into singing. How did it all start for you? I used to sing in my colleges/universities but it was not songs but Sufiana’s kalams or ghazals etc. Then people insisted that I sing more but my family was conservative so I never pursued it. After a while, I realized that this was my true calling and so I decided to pursue my dreams.

Yes, people thought I was pretty so I can’t be a good singer because it’s very rare that you are beautiful and a good singer too. It’s like a complete package. But yeah, I think I sing better too. Also, my acting skills speak for themselves as well.

What kind of music are you comfortable playing?

Pop and rock are my loves. But I can sing anything if it’s not very classical.

What are you currently working on?

I’m working on my next songs and acting projects as well. You will soon see me on your television screens. Insha’allah.

Are your music videos also released on TV channels or only on YouTube and social networks?

Which singers have you admired since your childhood? Are there any contemporaries with whom you would like to collaborate?

My favorite was Nazia Hassan but now at this time none other than Atif Aslam. It’s my dream to collaborate with him but unfortunately he collaborates much less with singers. At his side, Ali Zafar and Bilal Saeed.

Are you enjoying the current season of “Coke Studio?” Which track has been your favorite this season so far?