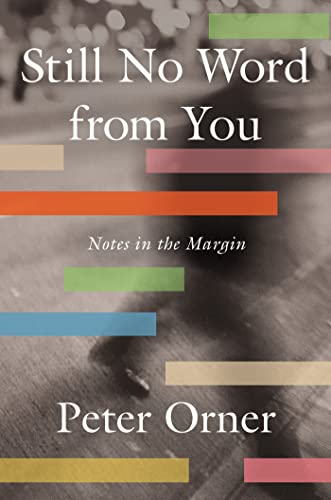 Notes in the margin by Peter Orner

Pushcart Prize-winning fiction writer Orner (Maggie Brown and others) brings his lyrical, mosaic style to the story of his own life in this beautiful and contemplative memoir. Blending photographs, family lore, speculation and literary musings, Orner’s non-linear narrative weaves through elliptical reflections and faint memories of his 1970s childhood to the heartaches and delights of his adulthood. The poetry of Yusef Komunyakaa, for example, becomes a balm in the aftermath of his stepfather’s death, lingering in Orner’s mind as he reflects on his mother’s grief: “We all go where the love takes us, whether closer or farther. Elsewhere, seeking solace from an unnamed grievance, Orner spends a day marveling at the crowded prose of Bernadette Mayer winter day: “[Her thoughts] connect like they do in our real brains. Meaning: they don’t. A similar stream of consciousness logic pervades its loosely connected vignettes, with certain recurring figures and dreamlike appearances of half-forgotten acquaintances. As Orner observes, “there is no greater fantasy on the face of the earth than the linearity of time. Only time turns. Likewise, when his fragmented ruminations return to a powerful impression or image or a favorite book, the effect is like flipping a prism in his hands, catching sharp flashes of light at every angle. Evocative and scholarly, this meditation on impermanence and its ephemeral joys is a gem. (Oct.)

2022-05-20
Previous Post: Top Energetic Features Of Online Payday Loans From Inside The Eddyville |
Next Post: Ed Sheeran almost quit music when he became a father