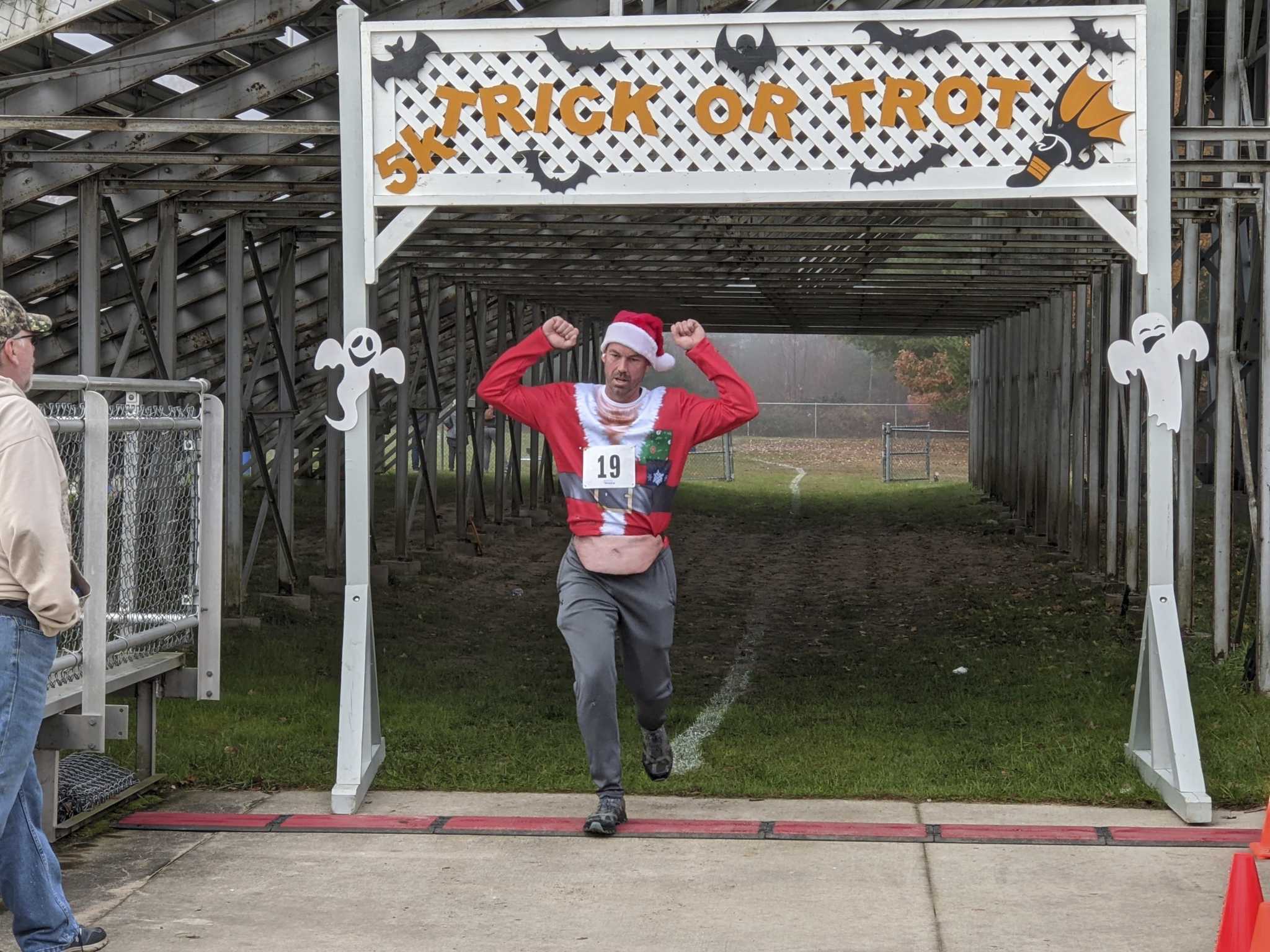 Tina McLaughlin and Stacey Crowder proved you can walk and run dressed in sneakers on Sunday at the Meridian Groups Sixth Annual Trick or Trot Fundraiser during School Cross Country.

The two were joined by a friend Carrie Bass, who also took part in the 5k event. All are parents of students in the group, and this was their third year at the event. All three moms agreed it was a great and easy fundraiser and helped the kids do things they love to do.

Many parents, grandparents and friends came on the cool, misty mornings to cheer on the runners and walkers and support the marching band’s program.

Meridian Band manager Matt Shephard, who is also a cross country coach, said he is very proud of everyone who supports the program. He said the community members have been wonderful and incredible supporters of the program.

â€œIt was a great day for a great run through the woods,â€ said runner Shelby Jessup, a grandmother of the group members. â€œIt’s a fun event for the whole family. The Meridian and Girls on the Run groups did a fantastic job of organizing it.

Parent Stephanie Messer said her two children are in the group. Her son has been there for five years and her youngest daughter for two years. She wanted to support an event that encourages her children so much.

April Owens’ children, Alyssa and Taylor, are also part of the group and she wants to support them as much as possible in a business that means so much to them.

Parent Tracy Diehl is new to the area and her daughter is in her first year in a group. She said the event is a great idea for a fundraiser.

Connar McDonald plays the tenor saxophone in an eighth grade group. He was ready for the race, dressed like a banana. He was joined on the cross-country ski trail by his brother, Maddox, 8, who was an elf, and their mother, Helena.

Connar McDonald said he loves bands and enjoys the songs they play.

This was assistant group principal Jenna Dornoff’s first year with school and her first Trick or Trot event, and she said she saw some interesting costumes.

â€œI think it’s amazing,â€ Dornoff said. â€œThere are so many people here. Meridian is an exciting community to be a part of. “

Dornoff said that was just one of the fun things the group was doing.

â€œWe try to create a fun and engaging atmosphere that the kids in the group like to be a part of,â€ Dornoff said.

12-year-old cross-country team member Remygnton Clish finished first in either the lap or trot. He finished in 21 minutes and 23 seconds.

â€œMy legs were a bit tired,â€ said Clish, after also running a 5k the day before for the regional cross country championships. Clish isn’t in the squad, but he loves to run.

The mother of a friend of Clish’s, Ashley LaFave, encouraged him.

â€œHe was impressive after running a 5k yesterday,â€ she said.

Dressed like a bundle of hot tacos, David Collier, who used to run marathons with Shephard and Sheri Thomas, made all the way from Oxford on Sunday to support the group’s schedule.

Danny Babcock encouraged his daughters who ran the path. Her daughter, Page, 12, is in the group, and her sister, Danielle, 10, also ran to support Page.

â€œI like it, I’m glad they both wanted to do it,â€ Babcock said. “Better than them sitting at home playing on their phones all day.”

2021-10-31
Previous Post: Here are all the 2021 American Music Awards nominations
Next Post: 7 of his most critically acclaimed films