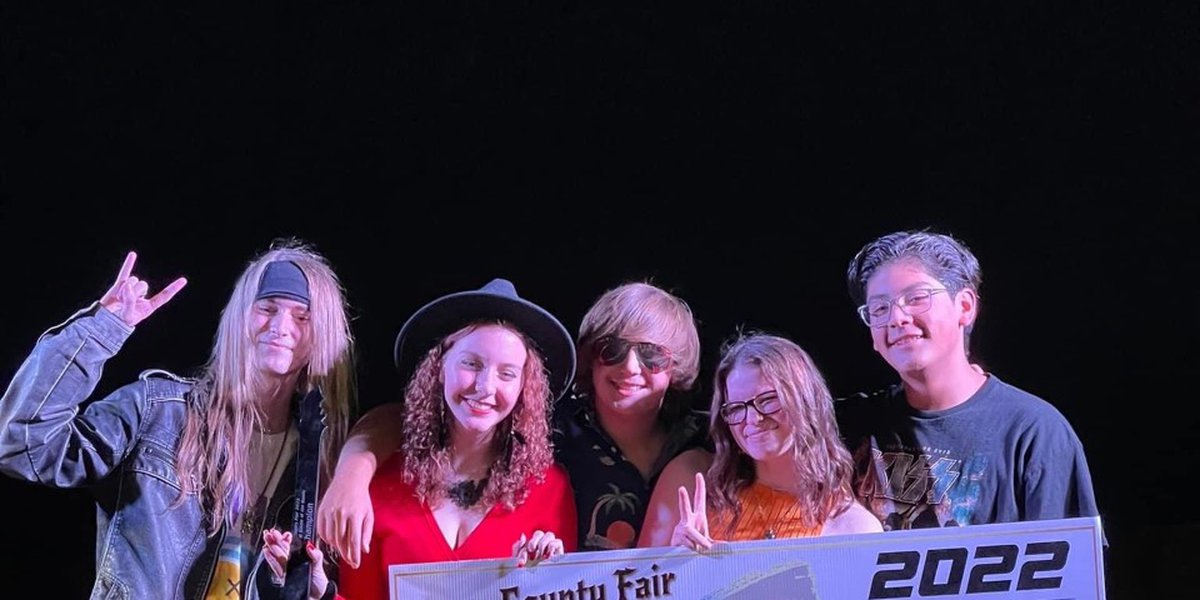 They recently participated in the 1st Annual Battle of the Bands Contest at the Curry County Fair in Clovis. The group competed against four other groups and won. They received a check for $3,000, a guitar and a trophy.

Scholl said it all started when she, Brooks and Hansen went to an Alice in Wonderland-themed cafe with Scholls’ uncle.

“There was one of my uncle’s friends doing open mic there, and we went out and I ended up singing there and found so much fun with it.” Scholl said, “I got Jace, our lead guitarist, to play for the very first time in front of people. And I jokingly told Dakota that she should learn bass because I didn’t want to. And she picked it up.

After that, they reunited with McClanahan and Luna to complete the group. They had their first open mic together at that same cafe.

Scholl said the band had a lot of fun traveling around Lubbock and surrounding towns, playing venues. It’s a variety group, so they play music. It can range from classic country music to classic rock.

“Whether it’s the old Johnny Cash, or the new Carrie Underwood, or up to Joan Jett, or Led Zeppelin, hopefully they’ll find the ones they love,” Scholl said.

All About Alice took part in a Battle of the Bands competition last Friday.

“We were the last group to play, we went there. And we signed up, got these cute little shirts, and just rested for a while, looked around,” Scholl said. “And then the first groups continued, they were pretty good. And we’re like, okay, this is a good competition.

They competed against country bands and metal-rock bands. Scholl said the other groups were very talented, so they didn’t know who would win. They just hoped for the best.

“They told us the judges were ready. We heard third place, we’re like, okay. Second place, and then we get a little more nervous,” Scholl said. “Like, we hope somewhere we could be in there, you know. And then we heard the first place and that was us.

The band was ecstatic and happy because they went from playing in their jam room to winning a battle of the band’s competition.

“And we were so proud of ourselves because we walked into our original music and to think that the judges and other people liked something that we created was just amazing,” Scholl said. “And that it wasn’t something that we covered because the majority of us are a covered band, but it was what we did that we created and somebody really liked it and that was really inspiring to see.”

All About Alice has a concert this Friday at Adventure Park.

“It’s from 7 p.m. to 10 p.m. It’s only $5 cover to come to the group, but they have so many awesome things there, from go-karts to bumper boats, and mini-golf, and we’re in the beer garden so it all the world can come out and listen and have a good time,” Scholl said.

For more information on upcoming All About Alice concerts or events, visit their website here or their Facebook page here.