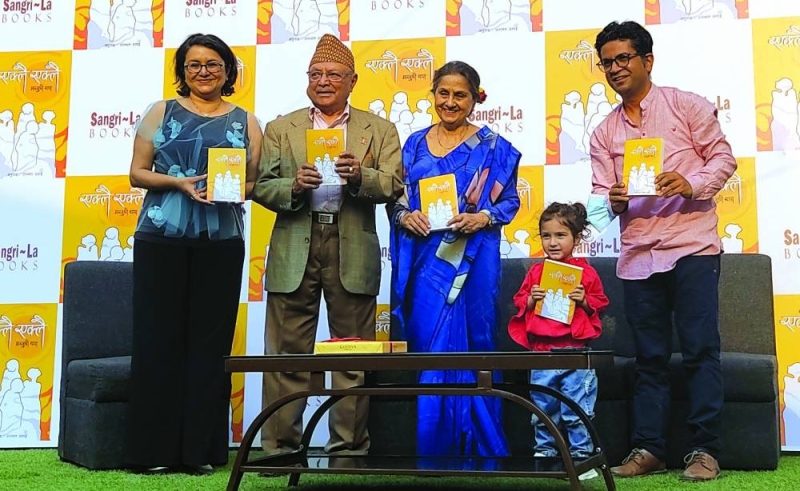 Eklai Eklai, Ujjwal Prasai’s translation of We All in Our Own Lives by Manjushree Thapa in Nepali, was launched in the capital on April 8.

According to Prasai, he wanted the title to be neither complex nor difficult; he wanted to capture the essence of Buddhism that had influenced Thapa while naming the original work.

“Although eklai eklai are two words, they are still linked while retaining their individuality.”

It is Thapa’s first English book to be translated into Nepali. “I feel fulfilled and moved because the characters set in Nepal have learned their own native language,” she said at the event.

Thapa is known for her English books set in Nepal.

The book, published in 2016, revolves around some of the major events in the history of contemporary Nepal, such as the 2015 Gorkha earthquake, the declaration of the constitution, among others.

The book launch was followed by a discussion moderated by Pranika Koyu.

The inclusiveness brought by the translation will also broaden the scope of the literature for non-English speaking readers, noted author Yug Pathak.

A very interesting thing about Eklai Eklai is the rhythm. As Prasai is from eastern Nepal, he tried to add local words used there in the translation.

Another idea on which the writer and the translator insisted was the “decolonization” of the language.

They believe that the Nepali language is far too formal in writing, therefore, it needs to be toned down so that everyone can read the language with the same ease as people speak.

Koyu, who read both versions of the book, pointed to Prasai disinfection in some areas, especially in a section where some young people had come across adult magazines.

All three spoke about censorship in creativity and whether it should be there.

Writer Uma Subedi, who writes novels in Nepali, was delighted to get a copy of Eklai Eklai. She shared that the joy and satisfaction that Nepali literature gives her cannot be harnessed by an English literature.

A student, Binay Karki, was delighted to read the translated book. Another student, Barsha Tamang, however, was skeptical of the translated works as she feels that the original emotions are not justified in another language.

However, Thapa was delighted to read the translation and highly praised Prasai for making the book even more beautiful.

As Koyu said, “Even complex layers of emotions were brought to life beautifully by Prasai.”

A version of this article appears in the April 10, 2022 printing of The Himalayan Times.