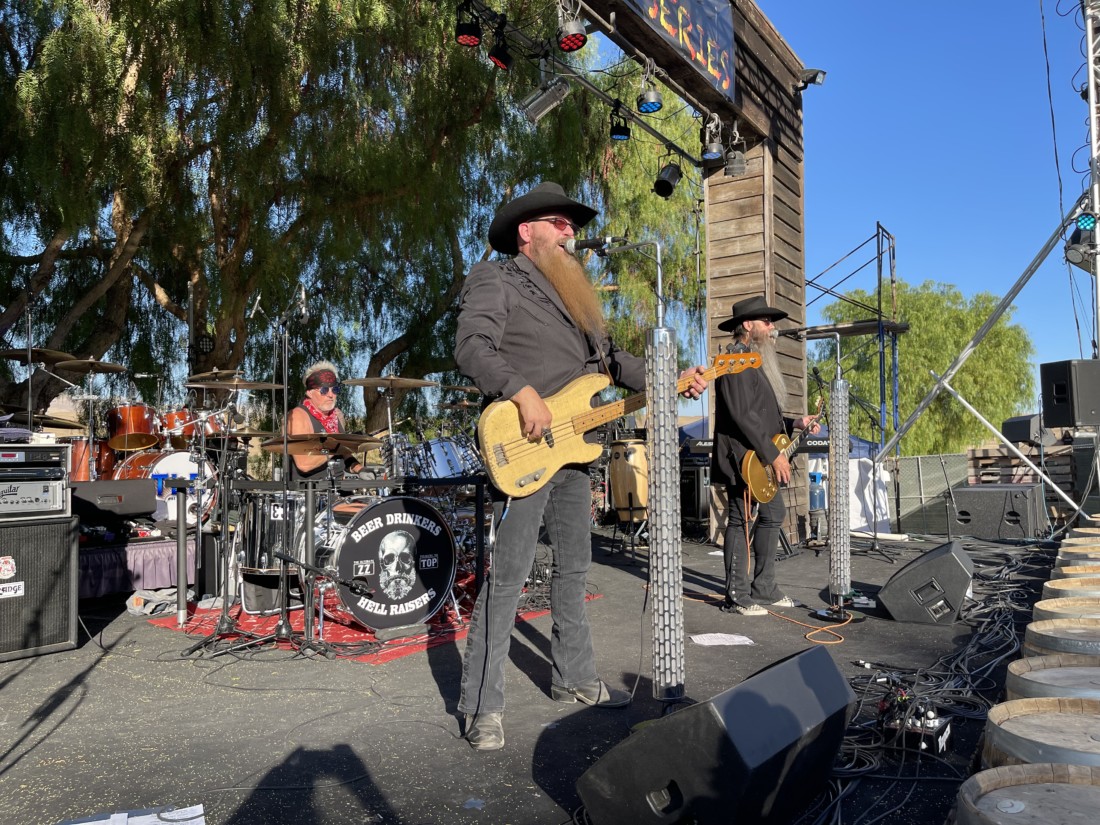 There was no rose champagne on ice or anyone attending in a silk suit with a black tie at the July 16 concert at the Pepper Tree Ranch Amphitheater in Hollister, as two bands presented opposing views of life: one drawn from the poetic from Laurel Canyon, saying that we’re all just prisoners here of our own device, and the other derived from a Texas blues that understands that every girl is crazy about a well-dressed man.

However, more than 1,500 music lovers in the Guerra Family Room seemed too much to enjoy themselves to take sides. The long terman Eagles tribute band, and Beer Drinkers and Hell Raisersa ZZ Top tribute band, kicked off the second in a series of five events in the Hollister concert series.

“Who doesn’t love the Eagles? said Denise Verdugo. “And everyone knows ZZ Top. As for the venue, I grew up in San Jose and attended concerts all over the area. No one else has a place as beautiful as this and the scenery in front of you is amazing.

Verdugo’s husband, Arthur, owns Arturo’s Painting, one of 11 sponsors of the concert this year.

“We do it because it’s a fun event and we want it to continue,” she said. are great and the wine is wonderful. What more can you ask for?”

The members of Beer Drinkers & Hell Raisers were whisked onto the stage at 6:30 p.m. in a reproduction of the iconic red 1933 Ford Coupe featured in numerous ZZ Top videos and began their set with 1981’s No. 4 hit “Tube Snake boogie”. quickly moving on to other familiar numbers, relying heavily on songs like ‘Gimme All Your Lovin’, ‘Got Me Under Pressure’ and, of course, ‘Sharp Dressed Man’ from the groundbreaking 1983 album ‘Eliminator “.

Bassist Chris “Cornbread” Lombardo and lead guitarist Tim Narducci have been performing their ZZ Top tribute for 12 years and have nailed the band’s signature moves perfectly on stage, though Narducci said reproducing the sound was a lot more complicated.

“It’s a very big business,” he said. “When Billy Gibbons records lead guitar, there’s usually about three parts. Three guitars doing three different things. Well, which one should I choose to play on stage? Which is the most memorable?”

Lombardo and Narducci played together in various bands for years and their versatility and repertoire unwittingly led them to perform as Beer Drinkers & Hell Raisers.

“A friend of mine called and asked us to play ZZ Top for a birthday party,” Lombardo said. “Then a few weeks later someone else asked us, and so on. There’s a big appeal to ZZ Top – they’ve taken the blues and made it fun. They talk about having a good time, partying, the other side of the blues sound.

Since then they have done about 500 concerts and played as far away as Sweden. But they keep coming back to Hollister.

We’ve played here before and at the Independence Day rally,” Lombardo said. “There is a great atmosphere here. People really come for the shows. The venue is awesome, the sound is awesome and we love playing here.

As the sun set, a steady breeze helped lift the heat of the day. The Long Run began their set, as the area in front of the stage was packed with dancers.

Kicking off their performance with a solid string of hits beginning with “Already Gone”, “The Long Run” and “Lying Eyes”, the Los Angeles tribute band took the evening in a softer direction as they explored songs from the Eagles and Joe Walsh.

Formed in 1999, The Long Run eschews imitation of the physical appearance of the Eagles, preferring instead to focus on the band’s sound and technical abilities. Songs like “Rocky Mountain Way” allowed the band to expand beyond mere rote performances and the Eagle’s trademark harmonies were painstakingly imitated in songs like “One of These Nights”.

With a catalog as successful as that of the Eagles, it was not difficult to string together millionaire hit after hit, crowned by the song that everyone came to hear, a shimmering “Hotel California”.

As the show’s closing notes faded into the evening, very happy audiences returned to their cars and another successful event ended for Hollister Concerts.

The series continues with: