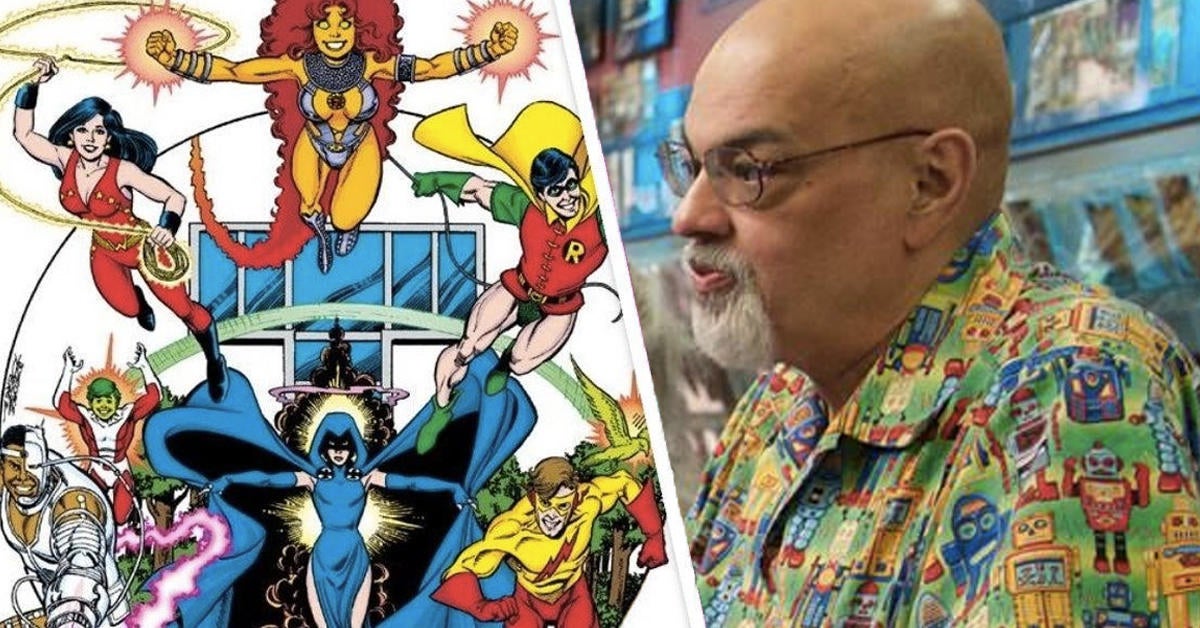 Legendary comic book artist George Pérez, who helped define the look of DC Comics in the 1980s and drew the pivot Crisis on Infinite Earths crossover event, died. He was 67 years old. Pérez revealed a cancer diagnosis in December, revealing he had stage 3 pancreatic cancer. Pérez told fans at the time that he chose to forgo chemotherapy, which he was told would she had little chance of success, and instead spending as much quality time as possible with her family, friends, and fans. Since announcing his illness, Pérez has been photographed at DC offices and scheduled signing and meet-and-greet events with fans.

“On November 29, I received confirmation that after undergoing surgery for a liver blockage, I have stage 3 pancreatic cancer,” Pérez told fans via Facebook. “It is surgically inoperable, and my estimated life expectancy is between 6 months and a year. I was given the option of chemotherapy and/or radiation therapy, but after weighing all the variables and assessing how many my remaining days would be devoured by doctor visits, treatments, hospital stays and the often stressful and frustrating bureaucracy of the medical system, i chose to let nature take its course and i will take full advantage of the time i I am left with my beautiful wife of over 40 years, my family, my friends and my fans.”

In 2019, Pérez announced his retirement from the comics, citing failing eyesight and other health issues. He continued to make convention appearances (whenever possible, given the Covid-19 pandemic), accept commissions and do signings.

Born June 9, 1954, Pérez is one of the few artists to have historically significant runs as a cartoonist on both Marvel’s The Avengers and the DCs Justice League of America. He began his career in comics as an assistant to The Fantastic Four artist Rich Buckler in the early 1970s, and would make his debut as an artist in a 1974 issue of Marvel’s amazing talesin which he drew a two-page parody of Deathlok, a character created by Buckler.

It didn’t take Pérez long to become a staple of Marvel, drawing son of the tigera save feature from writer Bill Mantlo The Deadly Hands of Kung-Fu. The two created the White Tiger together, Marvel’s first Puerto Rican superhero, and the artist’s popularity quickly took him to greater heights.

Pérez became a household name for comic book fans when he joined the creative team of The Avengers in February 1978. During his time on Marvel’s first team title, Pérez co-created characters like Henry Peter Gyrich and the Taskmaster.

A year later, in 1979, he will draw a The Fantastic Four Annual, which would revive the key creative partnership of his long career. In the “Cat’s-Paw” story, Pérez collaborated for the first time with veteran writer and editor Marv Wolfman.

Pérez was not exclusive to Marvel, and in 1980 began working for DC Comics as well. Pérez wanted to try his luck Justice League of America, which came after the death of longtime artist Dick Dillin. While drawing the adventures of the Justice League, he and Wolfman began collaborating on The New Teen Titans, a reimagining of Bob Haney’s Silver Age sidekick team that would change everything. Among other things, Pérez and Wolfman would introduce the character of Deathstroke the Terminator and tell the story of The contract of Judaswidely considered one of the best mainstream superhero stories of all time.

The New Teen Titans would consume much of the next four years of Pérez’s career, until he took time off in 1985 to work with Wolfman in Crisis on Infinite Earths, a massive line-wide crossover event that featured every character and alternate reality owned by DC. In it, a being called the Anti-Monitor has begun tearing the multiverse apart, destroying universes and causing the end of hundreds of characters. In the end, the Crisis the crossover would leave the DC Universe with a single unified Earth and a complex story that included as many characters as the creators intended to use. This status quo would last about 20 years.

In addition to Crisis himself, Pérez was involved in the last canon appearance of the pre-Crisis version of Superman, inking Curt Swan’s pencils on Alan Moore’s beloved story What happened to the man of tomorrow?.

In 1987, Pérez worked with writers Greg Potter and Len Wein to reimagine Wonder Woman for the post-Crisis time. As a plotter and artist, Pérez created a stronger connection between Wonder Woman and the gods of Greek mythology. Her take would become Wonder Woman’s definitive run, with each subsequent reimagining of her story leaning heavily on Pérez’s influence.

Pérez also periodically worked on Superman titles, with a notable contribution being his inks on the pencils of John Byrne in the Superman/Wonder Woman story in action comics #600. When Byrne, Wolfman, Jerry Ordway and other 1980s big names hit up three times a month Superman release schedule, Pérez supported action comics for a while, but eventually had to give up when he found making the blockbuster Superman and Wonder Woman titles was taking too long.

In 1991, Pérez orchestrated the War of the Gods scenario in wonder woman, which DC expanded to become a line-wide crossover. After many conflicts with the editorial staff, Pérez expressed interest in returning to Marvel, and the opportunity presented itself – with The Infinity Gauntlet. Unfortunately, he only finished four issues of this series before running into deadline issues. Marvel replaced him on the last two issues with artist Ron Lim, although Pérez stayed on to ink the covers.

For a while in the early ’90s, Pérez struggled to find his next big thing. He worked for Malibu Comics, Tekno Comix and Topps Comics (where he signed Steven Spielberg’s comic book adaptation jurassic parkwritten by Walter Simonson and drawn by Gil Kane).

His next two big superhero projects would be The Incredible Hulk: The Imperfect Future with writer Peter David, and Teen Titans. Returning to the title that made him a superstar at DC, Pérez inked the pencils of Dan Jurgens during the mid-’90s relaunch, which introduced a whole new cast of young heroes.

The next period would begin his next career explosion. After a short run on Silver Surfer, Pérez drew a Superman/Silver Surfer crossover comic. Then he jumped on the “Heroes Return” reboot of The Avengers, in collaboration with star writer Kurt Busiek. This series became a huge best-seller and is credited with elevating The Avengers, which had fallen far behind the X-Men as Marvel’s big-budget comic.

Next, Pérez and Busiek will collaborate on JLA/Avengers, which was the culmination of years of ambition on Pérez’s part. The artist was supposed to draw a version of the crossover that DC and Marvel planned in the 1980s, but creative and business differences between the publishers caused everything to fall apart. It wasn’t until 2003 that Pérez finally saw the story in print.

In the early 2000s, despite his success with The Avengers, Pérez returned to independent publishing, drawing a few titles for Gorilla Comics (the short-lived, writer-focused imprint of Image Comics) and CrossGen Comics. His main CrossGen title, Solutionsran for eight issues before ending when the company went bankrupt.

Between 2007 and 2009, Pérez again returned to DC, drawing The brave and the daring with writer Mark Waid and Final Crisis: The Legion of Three Worlds with writer Geoff Johns. Having contributed some art to Johns’ crossover event in 2005 Infinite Crisisthis decision made Pérez a contributor to all three Crisis stories in DC’s acclaimed “trilogy”.

Following the DC-wide relaunch of The New 52 in 2011, Pérez will serve as a writer and breakdown artist on Superman at its launch, with its work completed by Jesús Merino and Nicola Scott. He also inked on Jurgens pencils on green arrow during this period, and an unpublished New Teen Titans 1980s graphic novel, The New Teen Titans: Gameswas released as a deluxe hardcover edition, marking the last major collaboration between Pérez and Wolfman.

His last series before his retirement was the Creator Owned Series Sirens for Boom! Studios. He liked to center stories around powerful women, having also contributed an issue of Witch Blade and released a pair of issues from a creator-owned series titled crimson plague for Image Comics in 2000.sthis decision made Pérez a contributor to all three Crisis stories in DC’s acclaimed “trilogy”.

Following the DC-wide relaunch of The New 52 in 2011, Pérez will serve as a writer and breakdown artist on Superman at its launch, with its work completed by Jesús Merino and Nicola Scott. He also inked on Jurgens pencils on green arrow during this period, and an unpublished New Teen Titans 1980s graphic novel, The New Teen Titans: Gameswas released as a deluxe hardcover edition, marking the last major collaboration between Pérez and Wolfman.

His last series before his retirement was the Creator Owned Series Sirens for Boom! Studios. He liked to center stories around powerful women, having also contributed an issue of Witch Blade and released a pair of issues from a creator-owned series titled crimson plague for Image Comics in 2000.

Even in his final days, Pérez continued to love comic books and fandom. Ahead of a hospital stay in February, he said through his spokesperson: “The strength I have and the will to persevere comes in large part from all of you. Thank you.”

Our most sincere condolences to the family, friends, fans and collaborators of Mr. Pérez.

2022-05-07
Previous Post: “It’s really clear to me, either produce films that are worth seeing, or not do any at all”: Mihir Fadnavis
Next Post: Your EDM Q&A: Meditation Music Producer Yuval Ron Teams Up With Vocalist Úyanga Bold To Create A “Sacred Spiral” Of Sound