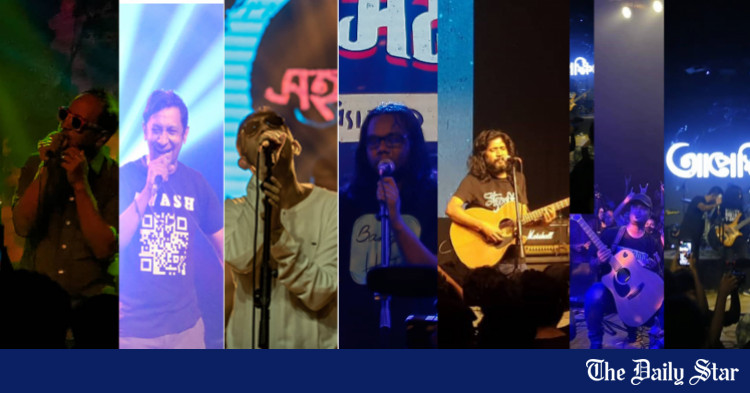 ‘Ei Somoy’ Features 7 Underrated Groups | The star of the day

To celebrate the feisty young generation of our county, a concert titled “Ei Somoy: Oddhay Ek” was held at Libaration War Musuem in Agargaon last night. The popular band “Meghdol” headlined the concert along with six emerging bands from our country.

For all the latest news, follow the Daily Star’s Google News channel.

Organized by Acoustica, the concert started at 3 p.m. and continued until 9 p.m.

The concert started with the Apekkhik group, followed by Bangla Five. They sang all their popular songs including “Left Right” and “Confusion”.

“The specialty of this concert is that the audience came at the invitation of the musicians. The ticket price for the concert will go directly to the bands. outside on a bigger scale next time,” Bangla Five singer Sina Hasan said.

Known for their poetic lyrics, the band Shohortoli cast their magic spell on the audience with their thoughtful songs.

“I thank the organizers of this concert for taking such a great initiative. I hope that the young people of our country will become wonderful human beings,” Tuhin said.

The concert ended with a great performance from Meghdol. They sang “Esho Amar Shohore”, “Kichhu Bishad Hok Pakhi”, “Nirban” and ended the show with their last track “E Hawa”.

Concert organizer Saikat Biswas Tutul said, “This is our journey with some of the underrated bands who have come to establish themselves in the music arena with the popular bands. This time we did the concert with psychedelic bands.”