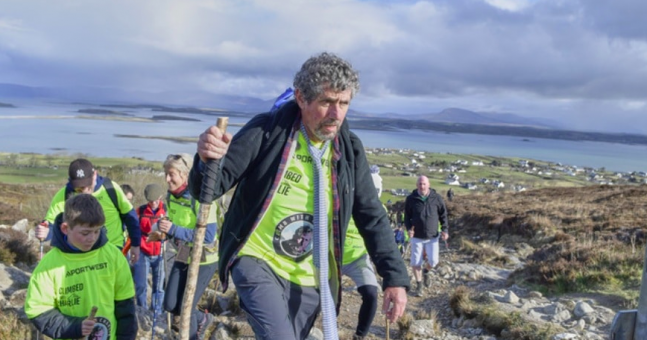 Charlie Bird published a book to commemorate Climb With Charlie

Compiled by his wife Claire, Charlie Bird has just released a new coffee table book featuring the best photographs from the Climb With Charlie fundraiser which took place in April.

Bird, who was diagnosed with motor neurone disease last year, climbed Croagh Patrick in support of the Irish Motor Neurone Disease Association and Pieta House. Fundraising spread and hundreds of people climbed the summit with Charlie to raise funds and awareness.

On top of that, thousands of people across Ireland – and even overseas – have claimed other mountains and hills to lend their support to the cause as well.

The new “Climb With Charlie Coffee Table Book” compiles the best photographs from all the climbs and will see all proceeds from sales of the book go to charity.

Earlier this weekend, the former RTÉ journalist spoke about the publication, praising his wife for taking on the colossal task of collecting all the photographs of the people who took part.

“Claire, my wife, has been in charge of tracking down all the photographers and photos from all over Ireland and overseas.”

“To be honest, she was working day and night but, thanks to Claire, we finally met the deadline to get all the photos.”

“Amazed” by the support

The 72-year-old also reveals he has been “totally blown away” by the continued support for him and his cause, as his fundraising campaign has raised over €3.25m.

“I keep saying it – people tell me I’m an inspiration, but I say it’s the people who have gone walking and climbing who have been the real inspirations.”

“What was so beautiful was the community spirit of the day. Strangers followed suit and walked and chatted together.”

Upon reaching the summit of Croagh Patrick, the climbers were rocked by the Clew Bay Pipe Band.

“It turned into a kind of session, which was never planned!”

On Friday, Charlie presented President Michael D Higgins with a copy of the book, which is now available and priced at £19. Climb With Charlie is available from bookstores, Dunnes Stores and Tesco – all proceeds from the author benefit Pieta House and the Irish Motor Neurone Disease Association.