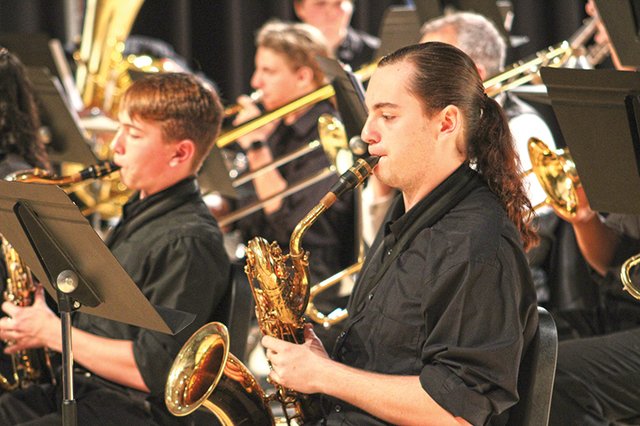 41st Pork and Bands a success

The 41st Annual Pork and Bands was a resounding success on Saturday night.

The annual fundraiser drew a large crowd of people ready to enjoy the live music and great food provided by High Roller BBQ. There were many different performances showcasing the talent and hard work of the Winter Guard, the Pioneerettes and various bands. Many local businesses donated baskets full of treats, gift cards and certificates for a silent auction to help support the Warren County Pioneer Band program.

The day started with a special performance by the Winter Guard in the gymnasium. The crowd then made its way to the auditorium to watch performances by the Warren County Beginning Band, WCHS Pioneers of Jazz, WCHS Pioneerettes, Warren County Concert Band and WCHS Symphonic Band. The WCHS Sax Quartet and the Brass Quintet performed in the lobby and cafeteria.

“The pig and the bands went fantastic. We had five great concerts and it was just a wonderful event overall,” he said.

The year-end musical extravaganza was fun for viewers and attendees alike. Junior Nicole Maneiro said she really enjoyed performing and watching her bandmates so well.

“In jazz performance, I’m really proud of the freshmen that go in. The guy who had the solos, Kaleb Hayes-Smith, he’s a freshman and he just started tenor too and he is very, very talented,” Maneiro said. “I really enjoyed playing with the jazz band because it’s a higher place and the more advanced players play in jazz and it was really such a great experience playing with all of them. It’s more like having fun playing music than learning it.

This event was also an opportunity to recognize seniors and their contributions to the program over the years. Farnham’s favorite part of Pork and Bands was when seniors were recognized.

“My favorite was when we played our songs for the elderly and just kind of commemorated everything they did,” Farnham said.

Ultimately, Pork and Bands raised money for music programs and was a fun way to end the school year and showcase student talents.