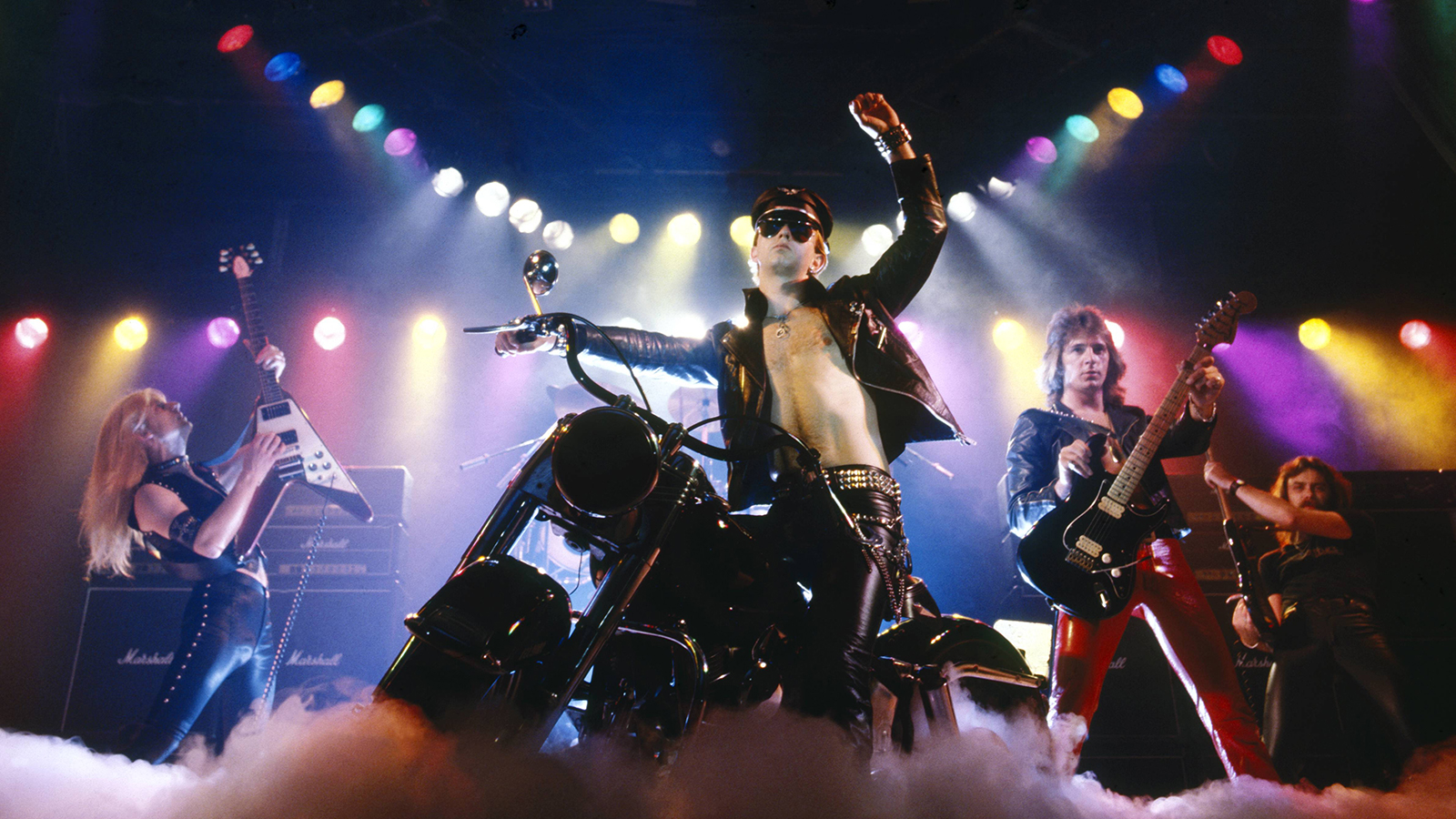 15 Great Bands That Take Their Names From Other Artists’ Songs

It’s usually pretty easy to tell what a band’s musical influences are. Every thrash riff goes back to the Big 4, the bouncy mosh parts come from NYHC and the melodeath riffery comes from Sweden. But when it comes to a band’s musical inspiration for their band name, it can sometimes be incredibly difficult to pinpoint, largely because the influence can often be much more left-wing.

From the titans of heavy metal who dubbed themselves after the tune of a folk troubadour, to the progcore band who found their nickname in the pages of a roots-rock band’s lyric sheet – here are 15 great bands that take their name from the songs of other artists.

Video of Poison – Talk Dirty To Me (Official Video)

Title Song: Poison – “Talk Dirty to Me”
You’d never guess it from their music, but post-hardcore heroes At the Drive-In get their nickname from a most unlikely source: Poison, the hair-metal radio executives of the 80s. Yeah really. See the line “I gotta touch you/Because baby we’ll be/At the drive-in” from the song “Talk Dirty to Me”.

Had vocalist Cedric Bixler-Zavala been successful, the band might have been named after a much more appropriate source: “At the Movies” by the Bad Brains. But co-founding guitarist Jim Ward won, and the rest – as they say – is history.

Title Song: Ramones – “Bad Brain”
Had At the Drive-In gone with a Bad Brains-inspired name, they would have continued in the spirit of the hardcore pioneers’ own nickname, which was taken from a song by one of their heroes. Originally a jazz fusion band called Mind Power, DC agitators eventually got their hands on a copy of the Ramones’ 1978 LP, road to ruinrevved up the track “Bad Brain” up to 78 rpm on their turntable, discovered the lightning-fast sound they craved – and their new name too.

Between the buried and me

Self-titled song: Counting Crows – “Ghost Train”
Who knew progressive metalcore pros Between the Buried and Me would get their nickname from a song by 90s roots rockers Counting Crows? Look no further than the band’s 1993 track “Ghost Train,” which features the lyrics “Fifty million feet of dirt between the buried and me.”

“To me, it has a positive message,” frontman Tommy Rogers said of the band’s name in a interview 2007. “It’s what we do between now and when we die.” BTBAM will enshrine the influence of Counting Crows on their covers album, The anatomy oftaking on a different song, “Colorblind”.

Title Song: Melvins – “Boris”
This one makes perfect sense. Japanese trio Boris are uncompromisingly eclectic – squirming between noise-metal, drone, post-rock, psych and more – and impossible to define. So do the godfathers of sludge/grunge, the Melvins, whose eight-and-a-half-minute steamroller “Boris” served as a creative starting point.

Naming Song: Misfits – “Hatebreeders”
As Jamey Jasta concisely explained in a interview 2017 by Hatebreed walk among us namesake: “We just took out the ‘E, R, S.'” Simple as it sounds, the moniker caused confusion in 2012, when CNN wrongly grouped Jasta’s band with “white power hardcore bands”, believing the name to mean the band intended to foster racial hatred. Of course, nothing could be further from the truth. “Our music brings together people of all races all over the world,” Hatebreed replied, demanding a retraction – which they quickly received.

Naming Song: Bob Dylan – “The Ballad of Frankie Lee and Judas Priest”
The folksy wisdom of Bob Dylan isn’t the first thing that comes to mind when Rob Halford screams on stage on a motorbike and starts screaming like one of Satan’s angels over dueling guitar strokes – but can -be it should be. Turns out, the metal gods — especially OG bassist Bruno Stapenhill — found their iconic name in the title track of a single take the bard created in 1967. The vibe Stapenhill was looking for? Something akin to the iconic Black Sabbath moniker.

Naming Song: Hawkwind – “Motorhead”
In 1975, Lemmy Kilmister was kicked out of jammy psych-rock band Hawkwind for using “the bad drugs”, as he succinctly put it, so what did the newly unemployed bassist do? He took the name of one of Hawkwind’s songs (written by the man himself), added an umlaut above an “o” for good measure, and formed his own band, one that actually sounded like a sensible five-liter engine that just wanted pure all day and night. For good measure, he also later re-recorded the song under his new banner.

Title song: – Motörhead – “Overkill”
Motörhead will name many bands in their rumbling wake. Exhibit A? Long Island Overkill Thrashers. The pedal-to-the-floor rock & roll of Lemmy and Co. was what the stalwarts of speed-metal built their sound around when they formed in 1980, so naturally they had to pay homage by doubling down on each other. ‘after one of Motörhead’s greatest. shots.

Video of Inside Out – Rage Against The Machine (Live/Unreleased)

Rage against the machine

Video of Dancing on Your Grave

Title Song: Motörhead – “Dancing on Your Grave”
Flashback to early 80s Brazil: A kid named Max Cavalera listens to Motörhead’s another perfect day LP and, as his English is not very good, translating the lyrics into his native Portuguese. “I came across ‘Dancing on Your Grave’,” Cavalera recalls the pivotal moment of Revolver. “And ‘fall’ [in Portuguese] is ‘burial.’ And so the name was born. … straight from Motörhead, which is pretty cool.”

Title Song: Black Sabbath – “St. Vitus Dance”
Doom legend Scott “Wino” Weinrich’s second gig was supporting Black Sabbath Paranoid, and to say it had an impact on him would be a major understatement. The imprint of heavy-metal creators is omnipresent in Wino’s music, from the Obsessed to Saint Vitus. This last group even takes its name from one of the tunes of Ozzy, Iommi, Geezer and Ward: Flight. 4 standout, “St. Vitus Dance.”

Title Song: Deftones – “Headup”
After naming Sepultura after the lyrics of Motörhead, Max Cavalera will name his next band after a Deftones cut – the one he played a major part in. “Headup” was the first song Max wrote after his acrimonious 1996 split from Sepultura, and it was a tribute to his late stepson Dana Wells, who was a fan and friend of the Deftones. “Soulfly/Fly high,” Cavalera roars over the song. “Soulfly / Fly Free.”

Song of the same name: Darkthrone – “The Pagan Winter”
It’s no secret that Pantera’s Philip Anselmo loves his Darkthrone. He even had a short-lived supergroup, Eibon, with Norwegian black-metal pioneers Fenriz (as well as Satyricon’s Satyr and Necrophagia’s Killjoy). So when, in the early 90s, Anselmo was looking for a name for a hardcore side project with black-metal influences, he turned to the lyrics of Darkthrone’s song “The Pagan Winter”: “United by hate/The final superjoint ritual”.

Video of Trapped Under the Ice

Trapped under the ice

Title Song: Metallica – “Trapped Under Ice”
“Trapped Under Ice” isn’t even close to being the best song on ride the lightning, but it’s a cool name that fits Baltimore’s flagship hardcore band, fronted by Justice Tripp, like a glove. After all, their ice-heavy bangers have names like “Stay Cold” and lyrics about heartless ice queens – “Fight Fire With Fire” wouldn’t have worked.

Naming Song: Unearth – “Endless”
“The wings of pain grow / Brought you to the winds of plague.” It’s a seriously badass line from an early Unearth song, and one that perfectly matches the mood of Winds of Plague’s symphonic deathcore overtures, which are replete with fantastical lyrics and battle-scarred breakdowns that carry their influences. metalcore to another level of heaviness.