french artist Valerie Massadian wants to see Atlanta — really see it – in all its glory and its difficulties, its beauty and its dirt. She’ll take her camera to our streets, wandering around the city peeling back her layers and documenting what’s underneath.

Massadian, an award-winning Franco-Armenian photographer and filmmaker, is visiting Atlanta for the first time to shoot a short film for “10 in America.”

Massadian during his conference and film screening at the Center Culturel Franco-Allemand. (Photo courtesy of Villa Albertine.)

Villa Albertine, a new French arts institution, hosted Massadian on September 22 to introduce her to some Atlanta art enthusiasts and screen three of her short films. The event took place at The new Franco-German cultural center in Atlanta at the Peachtree Center, the only one in North America.

Massadian is one of 10 French artists participating in “10 in America”, an artist-in-residence program with the Villa Albertine that takes French filmmakers each to a different American city to create a short film. These will be compiled into a documentary that reveals a portrait of the modern United States.

The Villa was created to connect French and American culture through artist-in-residence opportunities and cultural programs for residents and those in the creative industries. In its first year, the Villa will host 80 artists in 10 major US cities.

For this project, each filmmaker was assigned a city they had never visited, gaining a new perspective on life in America’s urban centers – Atlanta, Boston, Chicago, Houston, Los Angeles, Miami, La Nouvelle -Orleans, New York, Washington DC and San Francois. The documentary will reflect a truth of life, reality is relative, and after bringing together each different point of view, the bigger picture will emerge. 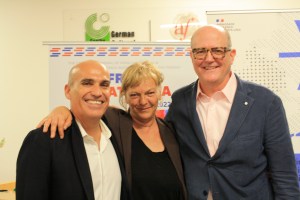 “This cannot be the final and absolute vision of the United States; it’s going to be fragmented,” said David Ruffel, manager of Villa Albertine in Atlanta. “It’s going to be 10 very personal films about 10 different cities, coming together like [puzzle pieces].”

Massadian is in Atlanta for a month, studying the city and its people to find inspiration for his next project. In January, she will return to the cinema. La Villa organizes the artists and facilitates the creative process, while Les Films Hatari and UFO International Productions will produce and screen the film.

Massadian’s previous works are both enchanting and haunting, offering an intimate look at his subjects while showing their humanity and their difficult, strong emotions. “Mamushka” follows Massadian’s mother as she comes to terms with her husband’s death, showing her in a cemetery, a bathtub and looking at old photos.

“I don’t have an audience in mind, I have honesty in mind,” Massadian said. “Whether [artists] are honest, it’s like they’re talking to you. It’s like a love letter or a revenge letter or both.

As for her next short film, she intends to give an honest look at Atlanta. Click here to learn more about Massadian and “10 in America”.